An inspiring exhibition of some of Sydney Ball’s earlier works that has been resurrected from the artist’s studio and re exhibited at Sullivan+Strumpf. One of these works, ‘October Fields’, was also exhibited in the recent Sydney Contemporary Art Fair by the gallery. The work held up really well amongst more contemporary works, in fact I think it looked stronger and fresher than a lot of other works displayed. It is also inspiring to see an exhibition of an artists work who has been paintings a long time, gone through the ups and downs of taste and fashionability in the art world, and now at 80 years, the artist is again recognized and his works reinvigorated and acknowledged. 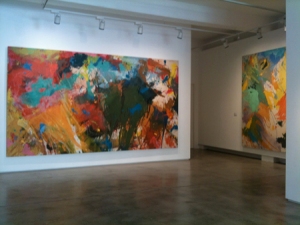 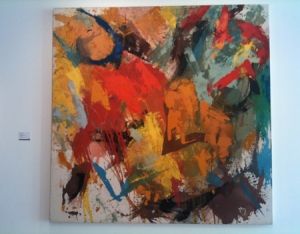 Sydney Ball (b. 1933, Adelaide) was in the vanguard of Australian artists who elected to live and study in New York (1963-1965). He enrolled at New York’s Art Students League, where he encountered lecturer and mentor Theodoros Stamos, who introduced him to artists of the New York School including Willem de Kooning, Lee Krasner, Robert Motherwell and Mark Rothko. The Canto paintings (and subsequent Persian and Modular series) exhibited on his return to Australia introduced hard-edge abstraction, which prompted curator John Stringer to later write that; ‘Ball established himself as a prophet at home by generating large canvases… that seemed to have no precedent in Australian culture.’

Begun during Ball’s second stay in New York from 1969 to 1971, the inaugural Stain series was exhibited at Sydney’s Bonython Gallery in 1973. TheStain paintings were distinguished by their unprecedented scale, but most notably by a new painterliness.

Although colour remained the primary concern, painterly abstraction introduced fresh challenges and an unaccustomed freedom, as Ball began to work on the floor with access to all sides of a painting. Gone were the precisely defined edges, the flatness that had characterised his earlier series, displaced by canvases flooded with splashes and spatters of colour, permitting a fresh openness and luminosity. The Stain series of around 100 paintings preoccupied Ball for almost a decade from 1971 to 1980.

Reflecting on the series in 2013, Patrick McCaughey, who had visited Ball in New York, makes the observation; ‘Each painting is a fresh encounter as if Ball set out never to repeat himself… The Stain paintings are one of the triumphs of Australian art in the 1970s… How good it is to see them again and what miracles of vitality and enterprise they are.’ 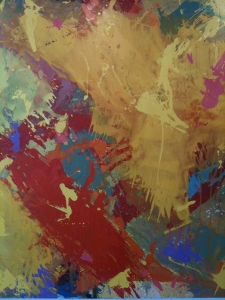 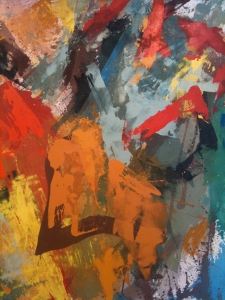 Details of the paintings 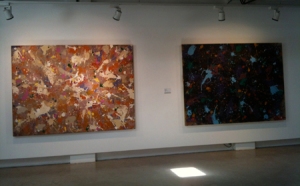